“A true artist has no shame,” says French painter Henri enticingly as he beds his neighbor’s wife, Margaret in Sharon Eberhardt’s Savage Arts. Based on a true story of an Indian witchcraft trial that took place in upstate New York in the 1930’s, this solo performance is a volatile mix of sexual longing, opposing cultures, criminality, and prejudice. In her quiet but audibly calm voice, Eberhardt takes on the personae of several distinct characters that people her story using a minimum of props — a simple apron and a single chair — with the addition of one shaft of light coming from the artistst’s studio that indicates his haunting presence. 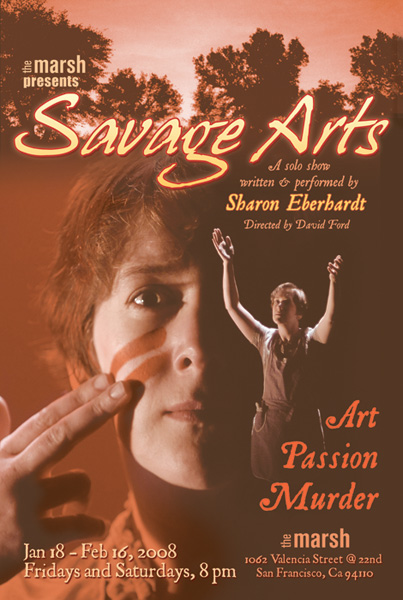 Based on an actual “Indian Witchcraft Trial” in 1930 Buffalo, NY. A naive housewife enters a world of art, passion and Iroquois tribal lore when a French artist moves next door. His paintings of Seneca Indians lead to a brutal crime.

Sharon is interviewed by the Cool As Hell Theatre Show hosted by KQED. Listen to the podcast! www.kqed.org/arts/cash

Savage Arts was originally developed at The Marsh, a breeding ground for new performance, as part of the Performance Initiative, directed by David Ford. It was presented at Emerging Artists One Woman Standing Festival, April, 2007.

The Theater: ‘Savage Arts” at the Marsh

Savage Arts, a solo piece written and performed by Berkeley playwright Sharon Eberhardt, which concerns an actual murder and trial that focused on witchcraft and Native American beliefs in 1930 Buffalo, N.Y., will have its final performances 8 p.m. tonight (Friday) and tomorrow night (Saturday) at The Marsh in San Francisco’s Mission District.

“Two Seneca women were accused of murdering a Frenchwoman whom they thought was a witch,” said Eberhardt. “The murdered woman’s husband was an artist from France who was painting dioramas in science museums on the East Coast. I felt foreign to the main characters and was concerned about how images, particularly of Native Americans, get manipulated, so I play a blue-collar neighbor, keeping her point of view, going back over the story, the information as she learns it. And things become more and more convoluted the more she finds out. It becomes a transforming experience for her; her impressions and prejudices change. I also become the other characters as it goes along.”

The trial was recorded in the local papers every day, earning a story in Time magazine. The Bureau of Indian Affairs even appealed to Herbert Hoover’s Vice President Charles Curtis (himself part Native American) to send U.S. district attorneys to investigate, but “the federal government backed off when the New York prosecutors objected.”

It was a time when “the Native Americans in that part of the country had ongoing direct contact with Europeans since the late 1600s. The reservations were established right after the Civil War; they seemed pretty deracinated by the 20th century. I think it was something of a shock to discover that some were still practicing their religion by the time of the 1930s. There were about a thousand Seneca speakers. It seemed to be a dying culture.”

“We know how to drive a car, but maybe not how to hunt,” she said. “With industrialization, society started romanticizing, revaluing what were thought to be Native American secrets. The Boy Scouts learned Native American tracking; the Campfire Girls, weaving. There was a sense, too, of primitive sensuality, passions we can’t feel every day—and that we can tap into those primitive passions. In the play, it comes up how we use these ideas, and plays with all this—the narrator, following the trial, is amazed by the passions.”

Eberhardt—whose one-acts have won awards and whose full-length Becca and Heidi, a female twist on the Jekyll-Hyde story was produced by The Shee Theatre Co. in San Francisco a few years back, commented on performing her own work.

“Stephanie Weissman, The Marsh’s founder, knew of my plays and that they’d gotten good reviews, and got me involved,” she said. “People responded to the characters in the workshops I went to. I worked in a class with David Ford. I used to be amazed at what actors did with the things I wrote. Now I realize I unconsciously knew more when I wrote my plays; I have to act them to know what they’re about.”

There are plans for the future for Savage Arts.

“We’ve approached a small theater in Santa Rosa about putting it on,” said Eberhardt, “and in the fall, I’m working to take it to Buffalo, have a workshop in a school there—and connect with the Seneca community. I look forward to developing the characters. maybe write some new scenes.”

Eberhardt, who’s from Buffalo, has an M.F.A. in playwriting from Columbia. Her husband, Perrin Meyer, introduced her to his friend, Malcolm Margolin, author of The Ohlone Way.

“Buffalo was a declining industrial area when I grew up there,” she said. “Then I lived in New York for years. It took awhile when I came here to appreciate living in beauty. But I’d never move to Florida! In the Bay Area, it’s not just beauty, but how we’re encouraged to go beyond tribalism, group prejudices … There’s more of that on the East Coast. It’s something in the play—I’m encouraged that we’ve gotten a little bit better in some areas. I hope we can move on.”